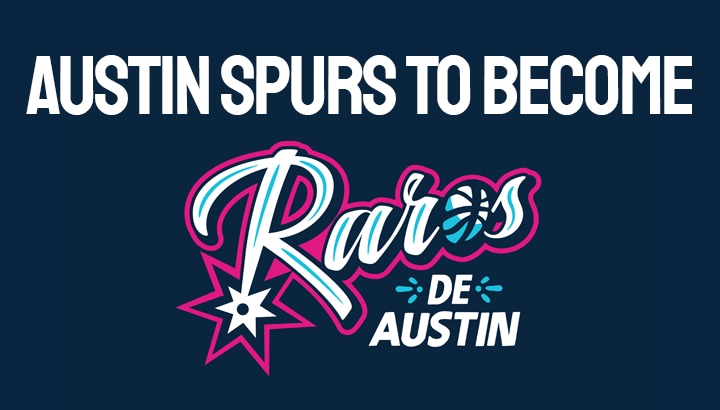 AUSTIN (Nov. 8, 2021) – The Austin Spurs today announced an alternate identity for the first time in team history. For three games during the 2021-22 season, the Austin Spurs name will be replaced with Los Raros de Austin, which translates to “the Austin weirdos.” The campaign will include custom uniforms, in-arena execution and digital activations.

The name aligns with the city’s “Keep Austin Weird” slogan, while the “o” in Raros depicts a basketball. The Los Raros mascot logo is inspired by Mexico’s mythical alebrije creatures. The bat-winged ears pay homage to the Mexican free-tailed bats beneath the Congress Avenue Bridge, and the vibrant colors of Barton Creek Blue, Dark Sky Indigo, Marquee Magenta and Texas Sun Yellow tie into the city’s landscape.

Fans will have the opportunity to see Los Raros de Austin on Nov. 27, Jan. 9 and March 5 at the H-E-B Center at Cedar Park. Following the game on March 5, the jerseys will be auctioned off with a portion of proceeds benefiting the Mexic-Arte Museum, which is dedicated to enriching the community through education programs, exhibitions and the collection, preservation and interpretation of Mexican, Latino and Latin American art and culture. The museum partnered with the Austin Spurs to help ensure the authenticity of the Los Raros de Austin logos.

Logos, images of the uniforms and the reveal video can be found HERE.