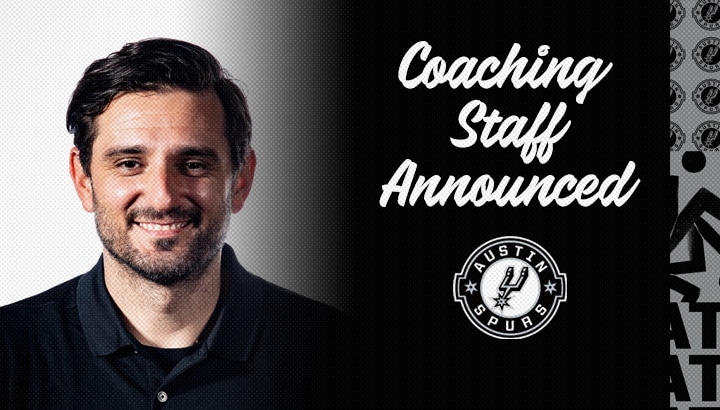 AUSTIN (Sept. 17, 2021) – The Austin Spurs today announced that the team has named Petar Božić head coach, making him the eighth head coach in franchise history. In addition, David Pilipovich, Nick Saenz and Jesse Childs have been named assistant coaches on his staff, joining Kenny Trevino who enters his second season as an assistant.

Božić spent the past four seasons as an assistant coach for the Austin Spurs. Before coming to Austin, he served as head coach of Partizan in his home country of Serbia from 2015-16 and assistant coach from 2013-15 following eight years of playing with the club from 2004-12. He helped lead Austin to an NBA G League championship in 2018 and Partizan to a Serbian League championship in 2014.

Pilipovich joins Austin with more than 30 years of coaching experience after spending last season as special assistant to the head coach at New Mexico. He previously was head coach at Air Force from 2012-20 and an assistant coach from 2007-12, finishing his career with the Falcons as one of two coaches in history to post multiple conference home winning records in a season, accomplishing it in 2012-13 and again in 2018-19. He served as an assistant coach with Michigan in the 2006-07 season, Eastern Michigan from 2000-05, Robert Morris from 1996-2000, Georgia State from 1994-96 and Florida Atlantic from 1988-91, in addition to roles as administrative assistant to the head coach at Michigan in the 2005-06 season and associate head coach at Florida Atlantic from 1991-94. He played collegiately at Thiel from 1982-1986.

Saenz comes to Austin after most recently serving as an assistant coach for the Greensboro Swarm, NBA G League affiliate of the Charlotte Hornets, from 2019-2021. Before joining the Charlotte Hornets in 2018 as a video coordinator, he was an NBA G League scout from 2017-18 and worked in player development for the Dallas Mavericks from 2015-17. From 2012-15, he was the men’s varsity assistant coach and junior varsity head coach at Central Catholic High School in San Antonio. Beginning his career with the Spurs organization, he held the role of scouting, player development and video coordinator for the Austin Spurs from 2010-12.

Childs enters his first season in Austin following more than six years as a basketball development coach for Trained2GoDevelopment in Phoenix. He also worked as a marketing director and trainer at The Phhacility in Phoenix from 2018-2019. He spent three years as head coach and trainer for Team Harden AAU from 2015-18 and one as sports director at Escalante Community Center from 2009-10.