They will be joined by tournament hosts Flamengo, who are the last Brazilian team to win the DIRECTV Liga de las Americas and FIBA Intercontinental Cup in the same year (in 2014) and are five-time champions of Novo Basquete Brazil (NBB).

The competition will take place at Carioca 1 Arena, the iconic venue that hosted the Olympic Basketball Tournament during the Rio 2016 Games. It will be played in a Final Four format, with two Semi-Finals on February 15, followed by a 3rd-Place Game and Final two days later.

The Semi-Finals matchups are as follows: 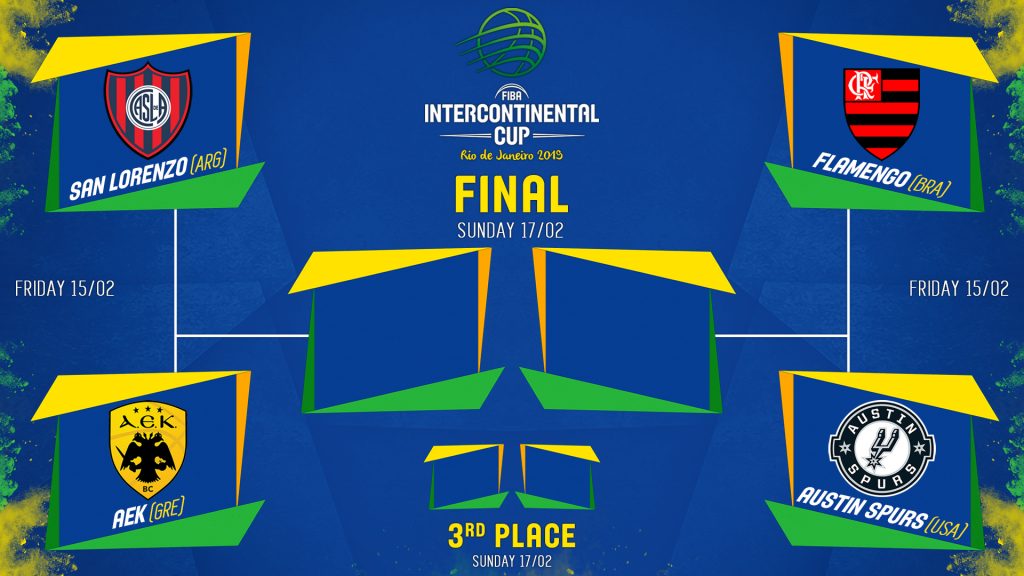 This is the first-ever edition of the FIBA Intercontinental Cup to feature the reigning champions of the NBA G League, Basketball Champions League and DIRECTV Liga de las Americas.

FIBA Secretary General Andreas Zagklis said: “We’re excited to bring the FIBA Intercontinental Cup back to the Americas and hold this edition in Rio’s excellent Olympic basketball venue, which was the site of so many great moments during the 2016 Games. The champions of the DIRECTV Liga de las Americas and of the Basketball Champions League will do battle here and look to create their own lasting memories. I also wish to express our gratitude to the city of Rio, the Brazilian Basketball Federation (CBB), the Liga Nacional de Basquete (LNB) and the host club Flamengo for their collaboration.”

“This year we are thrilled to confirm the growing global field of teams that will compete at next month’s FIBA InterContinental Cup. The addition of the NBA G League champions to the FIBA Intercontinental Cup is further proof of the great collaboration that FIBA enjoys with the NBA across a wide range of joint initiatives.”

NBA Deputy Commissioner Mark Tatum said: “Having the NBA G League’s Austin Spurs play in the FIBA Intercontinental Cup represents a fantastic opportunity – not only for the players to further showcase their NBA-caliber skills, but for the league itself to be represented on the international stage.

“We’re looking so forward to the event in February and thank our partners at FIBA for this first-of-its-kind collaboration.”

The portal for media accreditation is open and can be accessed here. The deadline to apply is Friday, February 8. Information about ticket sales and broadcasting of the competition will be announced in the coming weeks.

About FIBA
FIBA (fiba.basketball) – the world governing body for basketball – is an independent association formed by 213 National Basketball Federations throughout the world. It is recognized as the sole competent authority in basketball by the International Olympic Committee (IOC).