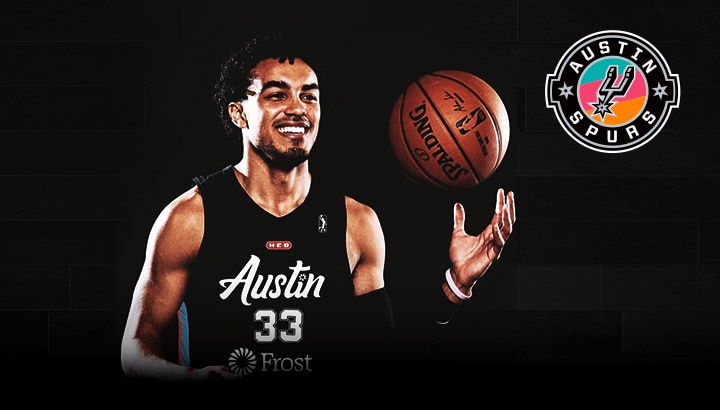 AUSTIN, Texas (Feb. 16, 2021) – The Austin Spurs today unveiled the team’s 2021 Austin Fiesta Edition uniforms. Austin will wear the uniforms for the first time today in their matchup against the Canton Charge at 2 p.m. CT, which will be nationally televised on ESPNU. Austin’s Fiesta game days are presented by H-E-B.

The Austin Fiesta Edition uniforms were modeled after the San Antonio Spurs’ Fiesta-themed City Edition uniforms, which feature San Antonio’s historic Fiesta colors. The black uniforms feature bold stripes of teal, pink and orange down the sides and on the waistband, with “Austin” emblazoned across the chest in old school script. Dotting the “i” is a rowel emblem, a nod to the iconic spur logo.

Austin will wear their Fiesta Edition uniforms again for their games on Sunday, Feb. 21 and Wednesday, March 3. Both games will be broadcast live on FOX Sports Southwest and can be streamed via FOX Sports GO and ESPN+. At the conclusion of the 2021 season, the uniforms will be auctioned off with net proceeds benefiting Spurs Give.

In addition, Austin Spurs Fiesta-themed merchandise will be revealed at 11 a.m. CT today. Fans can sign up to be part of the official Austin Spurs fan club at austinspurs.com/fiesta in order to be the first ones who will have the opportunity to pre-order the merchandise.