AUSTIN, Texas (Jan. 27, 2021) – The Austin Spurs will tip off their 2021 season on Feb. 10 at the ESPN Wide World of Sports Complex at Walt Disney World Resort. As one of the 18 teams that will participate in the G League season in Orlando, Austin will play 15 games before the top eight teams advance to play a single-elimination playoff. The 2021 Austin Spurs season is presented by SWBC.

Austin will be featured in four nationally televised games this season, starting with a Feb. 13 matchup with the Erie Bayhawks on NBA TV. The Spurs matchup against the Canton Charge on Feb. 16 will air on ESPNU and their Feb. 28 meeting with the Santa Cruz Warriors will be on NBA TV. Austin’s last game of the regular season against Team Ignite on March 6 will air on ESPN+.

The NBA G League enters the ESPN Wide World of Sports Complex after the NBA successfully restarted the 2019-20 season on July 30 at the same venue, concluding on Oct. 11. Local broadcast information and the Austin Spurs 2021 roster will be announced at a later date. 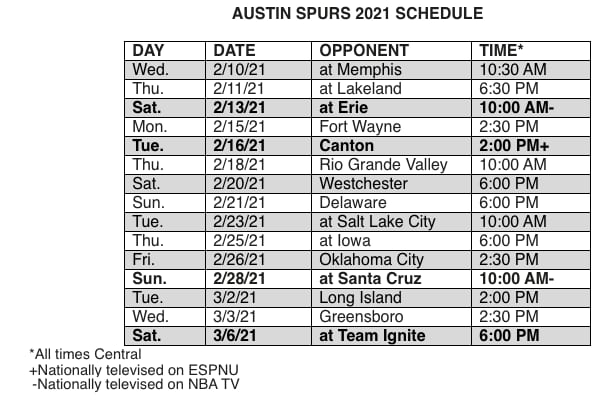